The Irish government has laid out its five-stage strategy for easing lockdown, starting on May 18 with phase one and culminating on August 10 with phase five.

The plan – which will only progress as per the schedule if the measures are working and they get the green light from the National Public Health Emergency Team – includes the re-opening of some hotels and holiday parks from July 20, and will allow tourists to travel offshore from August 10 at the very earliest.

Until then, government advice remains that all non-essential travel should be avoided; this including travel both into and from Ireland. Around three million British nationals usually visit the country each year. Its death toll (as of May 2) stands at 22, with 2,121 confirmed cases.

Of lockdown measures so far, Prime Minister Leo Varadkar stated: “It has been worthwhile, it is working, so let’s finish what we started.”

Our expert Aoife O Riordain, based in Country Kerry, says of the news: “It’s definitely a relief to see some light at the end of the tunnel, although I’m not sure how great it is for holidaymakers in the medium term.

“Anecdotally I know people who have already booked to stay in hotels in County Kerry in July and August in anticipation of the announcement last night, on the basis that they might be open but I guess it remains to be seen what that will actually mean in terms of reduced occupancy. From July 20, people will be allowed to drive long distance in Ireland so there might be a bit of a stampede.”

Here is what will happen according to Ireland’s ‘Roadmap to reopening society and business’.

Citizens are still advised to stay home ‘as much as you possibly can’, and remote working is to continue for all workers or businesses that can currently do so. People should ‘avoid unnecessary journeys’ and travel no further than 5km from their residence.

Up to four people who don’t live together can meet outdoors while keeping at least two metres apart.

Outdoor spaces and tourism sites (for example: car parks, beaches, mountain walks) will be opened where people can move around freely and where social distancing can be maintained. The same goes for public sport amenities (for example: pitches, tennis courts, golf courses).

Some shops, including garden centres and farmers’ markets will be permitted to reopen. A full list of these shops will be released ahead of May 18, the plan states.

The government has made clear that phase two will only come into play ‘if everything goes well with restricting the spread of COVID-19’ during phase one.

Citizens will be advised to ‘still avoid unnecessary journeys wherever possible’. However, people will be permitted to travel up to 20km away from their home, instead of the previous 5km.

People who can work safely while maintaining a two-metre distance from others will be allowed to return to their jobs, and those in self-isolation can welcome ‘a small number of visitors to their home’, provided they wear gloves and face coverings.

‘Social distancing and hygiene measures continue for public and private transport as passengers increase,’ the plan states, adding the number of people will be ‘restricted and monitored’.

Again, if all goes to plan, cafés and restaurants (but not bars or pubs) providing on-premises food and beverages can re-open, but they must comply with social distancing and strict cleaning protocols.

This is where the most substantial changes will be made to the easing of lockdown.

As a resident, you will now be allowed to travel ‘outside your region’ and beyond the previous 20km limit. This is when our correspondent Aoife O Riordain predicts a ‘stampede’.

Hotels, hostels, caravan parks, and holiday parks for social and tourist activities can open, initially on a limited occupancy basis (or number of people per square metre), and then increasing over time. Social distancing measures are to be followed, and hotel bars are to remain closed.

Small social (non-family) gatherings will be permitted ‘but are to be limited to a maximum number of participants for a period of time where social distancing can be maintained.’

Museums, galleries, and other cultural outlets can be opened where people can move freely without coming into contact with others, social distancing can be maintained and strict hand hygiene is enforced on entry. The same goes for public swimming pools and places of worship.

Restrictions will gradually be decreased on the numbers travelling in major urban centres on public transport and in private cars.

For the first time since Ireland’s strict lockdown measures came into play on March 27, ‘non-resident tourist travel to offshore islands can resume.’

Pubs, nightclubs and casinos can also re-open, where social distancing and strict cleaning can be complied with; as can indoor recreational venues including bowling alleys and bingo halls.

A phased return to work across all sectors will come into place, while ‘higher risk’ organisations, which, by their nature cannot easily maintain social distancing, ‘will implement plans for how they can progress towards the onsite return of a full staff complement.’

Enclosed shopping centres can re-open, with social distancing in place; as can theatres and cinemas.

When will I be able to visit Ireland again?

This remains to be seen. The Irish Government’s advice remains that all non-essential travel should be avoided. This includes travel both into and from Ireland. The FCO, too, advises British nationals against all but essential international travel.

It states: “This advice does not affect travel from Northern Ireland to Ireland or intra-UK travel, but you should follow respectively the Irish and UK public health guidance if you need to undertake essential travel.”

All passengers arriving in Ireland from overseas for essential purposes are currently expected to self isolate for 14 days on entry, as well as to complete a ‘Public Health Passenger Locator Form’, showing their contact details and the address at which they will self-isolate. The form also allows for the operation of a system of spot checks to verify that incoming passengers are complying with self-isolation.

Could Britain and Ireland form a ‘tourism bubble’?

In the last week we have heard whispers of how ‘social bubbles’ could be introduced during a phased exit of lockdown. Downing Street is reportedly considering the plan, which would allow people to mix with a small group of family and friends.

The idea has already been rolled out in New Brunswick, Canada, where residents can pick another household to interact with. But now, countries are discussing possible ‘travel bubbles’ – a plan that would allow people to move freely between two or more countries in a phased introduction to international tourism.

If domestic tourism in the UK resumes before international tourism, which is likely, it is possible that a de-facto travel bubble could be created between the UK and Ireland, since there are currently no checks on the Northern Ireland border.

Indeed last week two major business groups wrote to the governments in Dublin and Belfast to urge cooperation in the recovery from coronavirus. The CBI and its Irish equivalent, Ibec, have said an economic reboot will need “the highest level of co-operation, co-ordination and joined-up thinking”. A bilateral tourism push could form part of this.

When will flights to Ireland resume?

While some flights and ferries continue to operate, travelling to and from Ireland, or any other international territory before the FCO lifts its ‘all but essential travel’ restrictions would be unwise, not least because it would almost certainly nullify your insurance.

With the exception of Wizz Air, which last week resumed some commercial flights to destinations in Europe including  France, Spain and Portugal, other airlines have been reluctant to announce when they might return to the skies.

Ryanair last week confirmed that the vast majority of its fleet will remain grounded until at least July. A handful are still operating, including occasional services from Dublin to Gatwick and Stansted, designed for essential travel purposes only.

The low-cost airline, which has just shed 3,000 of its pilots and cabin crew, does not expect to fly more than 50 per cent of its original schedule between July and September as it anticipates demand to remain suppressed after lockdown is lifted.

The airline says it does not expect to resume a normal schedule until 2021 at the earliest.

What to know in markets Wednesday

Tue May 5 , 2020
Earnings from Delta Air Lines (DAL) and AT&T (T) will take center stage Wednesday. The airline industry has been one of the hardest hit amid the COVID-19 pandemic. Travel demand got hammered over recent months and major U.S. airlines have had to slash capacity in an attempt to preserve cash. […] 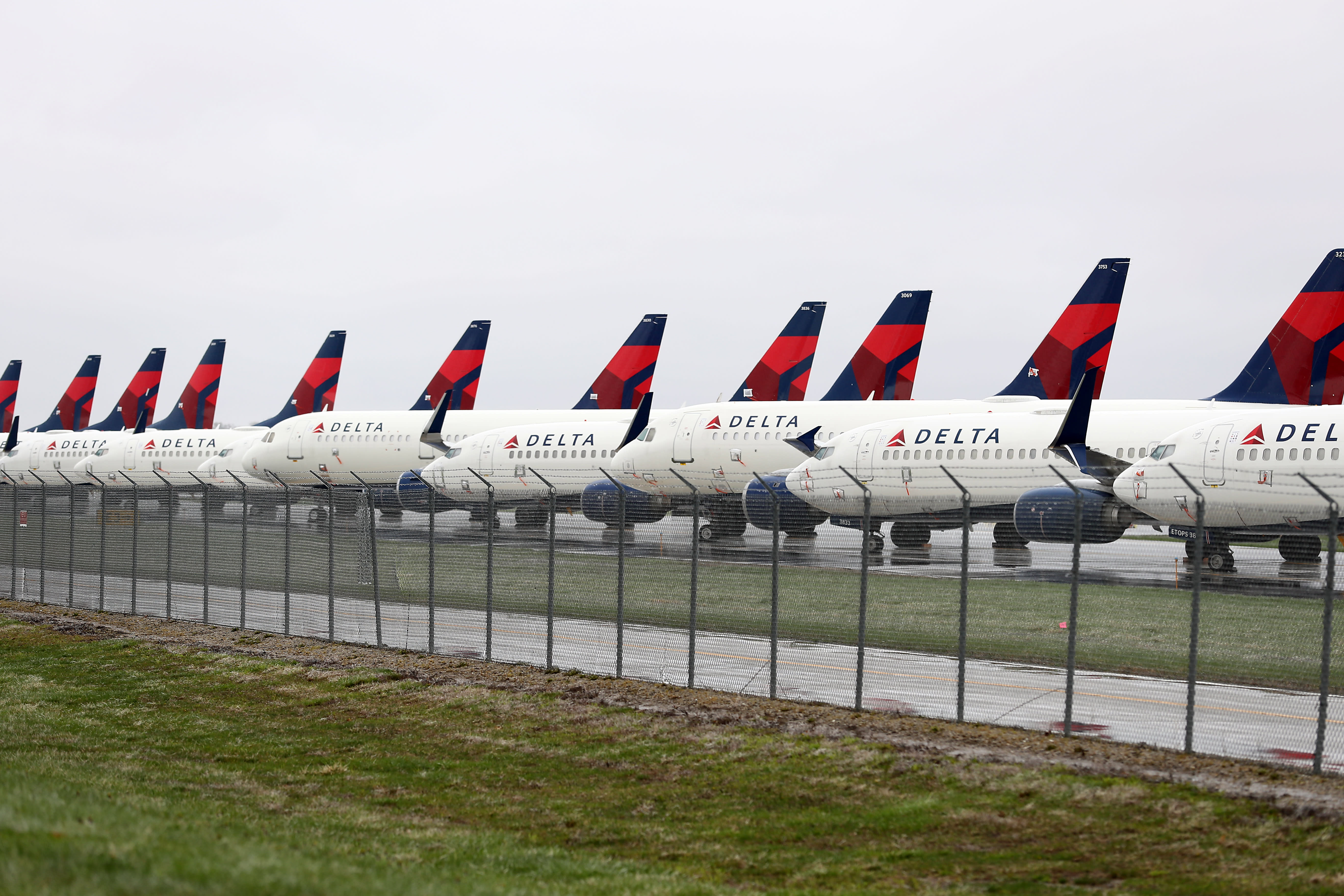